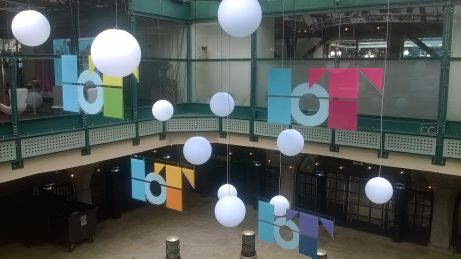 At a talk in London last month, Don Tapscott, author of Blockchain Revolution, widely regarded as the bible of blockchain, compared the technology to a Chicken McNugget (other fast food products are available).

How does this work? “Think of it as a highly processed thing,” Tapscott told the audience. “To hack that Chicken McNugget and turn it back into a chicken would be really hard to do. At some point, somebody’s going to be able to do that, but for the foreseeable future, this is pretty secure.”

It is certainly an interesting analogy, and relates to the continuous system of record blockchain provides. Speaking at the Cisco IoT World Forum, Tapscott argued: “I won’t say [it’s] unhackable, but this is infinitely more secure than the kind of computer you can buy which you have in your companies today.”

Given the arena in which he was speaking, the topic was not so much blockchain, but how it related to the Internet of Things. “What if there were not just an internet of information; what if there were an internet of value?” said Tapscott. “Some kind of vast global distributed ledger, or database, or spreadsheet where entering a value, from money, to stocks, to intellectual property, to music, to votes, could be stored, managed and transacted in a secure private way?”

To those well versed in blockchain and its capabilities, this is nothing new. Yet plenty of people are making the link between the two.

A report from BI Intelligence looks at the ‘developing’ role of blockchain in the IoT ecosystem. “Companies are pioneering innovative new solutions that use blockchain for tasks like tracking goods as they move and change hands in the supply chain, monitoring the location and condition of assets like industrial machinery at remote work sites, or storing medical data, and they are transforming the IoT,” Peter Newman wrote.

Meanwhile, in a piece for Huffington Post, Paul McNeil opined: “As IoT expands into a smart, machine to machine economy, the technologies that support it will have to evolve accordingly. Distributed ledgers might be the answer to the problems of a seamlessly connected world.”

Tapscott gave a couple of examples as to how blockchain was disrupting the disruptors. In April last year, Airbnb ‘acqui-hired’ the majority of the team behind Bitcoin-based micropayments provider ChangeCoin. The story quietly broke in QZ without causing a huge ripple. Instead of booking a room and sorting payments as we do currently, Tapscott outlined a vision whereby the smart contract kicked in and payment was executed as soon as a user put their key in the door.

“This is all of a sudden the room becoming part of the economy in a way that changes fundamentally a business model. [Airbnb] understand this,” he said. “They don’t want to be disintermediated by a distributed app and a bunch of smart contracts on blockchain.”

Uber, Lyft and the like provide another example. When you look at it, the volume of transactions taking place are not just limited to booking your cab. Paying for petrol – or charging if it’s electric – repairs, paying for tolls; the list goes on. “All of these could be handled by a blockchain,” said Tapscott.

Identity also formed a key part of the conversation. “Arguably today, our identities are being captured by outside parties,” said Tapscott. “As you go through life you leave this trail of digital crumbs, that gets collected into the virtual you – the virtual you may know more about you than you do. This is a problem – it means you don’t have access to this data, you can’t monetise the data, and your privacy is being undermined.

“People say to me ‘come on Don, privacy is dead, get over it’, and I think this is wrong. Privacy is the foundation of freedom, and our identities consist increasingly of all of this data, and we need to get our identities back so we can manage them responsibly.

“This is one of the great things about blockchain – as a human, if you sell me something, you actually don’t need to know who I am,” he added. “All you need to know is cryptographic proof that you’ve been paid. The very same thing can exist for our devices and things – and this enables us to avoid all kinds of big problems.”

Tapscott described blockchain as both ‘nothing less than the second era of the internet’, and ‘the biggest innovation in computer science in a generation’. Whether it comes to pass in those terms is still a matter for debate – but the Cisco audience seemed reasonably impressed.

The impact of blockchain technologies on food traceability and supply chain