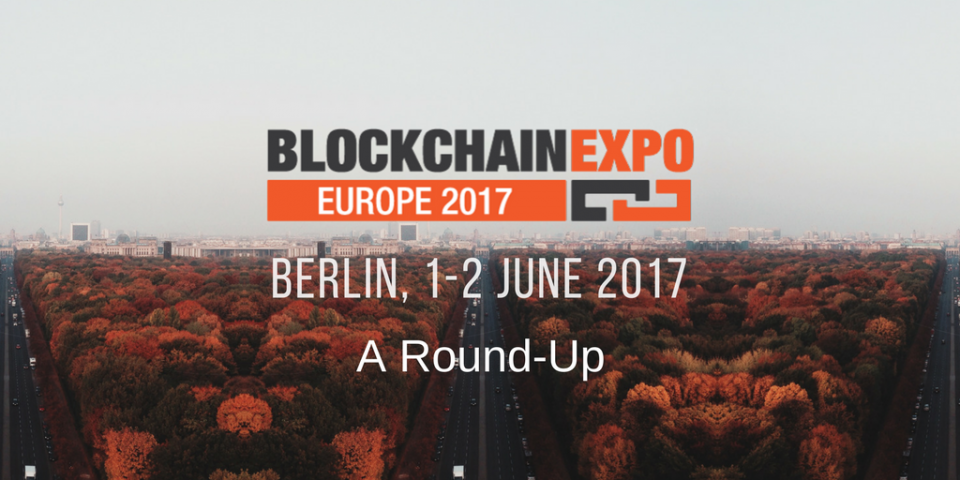 On the 1st and 2nd of June 2017, Blockchain Expo descended on Berlin for its second edition. Over 4,000 attended the event over two days focusing on IoT, Blockchain and AI – a winning combination!

From the Blockchain Industry Track, a few things that we will see changing beyond recognition in the next 10 years:

Banks – Some of the experts say we don’t need to wait that long, 10 years will be enough to see the currently budding peer-to-peer lending platforms and those developing payment systems based on blockchain taking over the traditional banking systems on the high street. Paul Kammerer, Vice President Development and Strategy for Commerzbank took the audience through the internal experience of using blockchain: early commitment from the board, ecosystem building and skill up existing staff were key aspects to launch the DLT Lab within the bank. Traditional banks will need to adapt or take the risk of becoming redundant, however ‘blockchain is not the magic bullet, if you think blockchain is the solution to your problems, you don’t know what your problem is’- quoting Max Kordek from Lisk Foundation the Blockchain Application Platform.

Dinis Guarda, CEO of Humaniq took to stage to showcase how, by using digital technologies, he intends to take financial services to the unbanked. In Sub-Saharan Africa, of the 350 million adults who don’t have a bank account, 155 million are reported to own a mobile phone. ‘By harnessing the power of digital technologies – said Dinis – Blockchain can create a trustworthy digital identity to tackle the lack of identity papers of many unbanked people. Also can be used for building a truly decentralised digital smart-contract-based community. These unbanked people are excluded from the global economy and are ignored by traditional banks. By actively developing peer-to-peer finance by giving the poorest the financing tools that will enable them to accelerate economic growth and fuel new opportunities in their countries, we are empowering them to grow and prosper.

Energy distribution – Dr Urban Keussen from Tennet, the national electricity transmission system operator of the Netherlands closed the first day of the conferece in Berlin. Tennet is responsible for overseeing the operation of the 380 and 220 kV high-voltage grid throughout the Netherlands and its interconnections with neighbouring countries. The company is currently looking into alternative energy sources and how this will affect the stability of the grid.

Currently conducting a trial to use blockchain backed smart contracts for one project in the Netherlands, alongside renewables supplier Vandebron who will work with customers who own electric vehicles to make the capacity of their car batteries available to help TenneT balance the grid. A second project in Germany is with smart technology provider Sonnen eServices and it will include a network of residential solar batteries helping to reduce limitations on wind energy at times of insufficient grid capacity.

“Germany’s retreat from nuclear and fossil-fuel energy means more renewable energies at all levels of the grid, which presents significant challenges. We must be flexible with regards to our management of energy production, namely solar and wind, that is inconsistent and highly contingent on the weather.

“Utilizing blockchain technology offers us new ways to network even locally distributed systems both safely and intelligently across multiple regions with one provider. This helps us to limit the use of network-stabilizing measures, such as the costly regulation of wind farms.”

Passports – Identity data is typically decentralized, different organizations hold varying elements of identity, gathered from ad-hoc interactions throughout an individual’s life. This presents a number of problems and challenges such as too many steps and documents involved in proving identity, unpleasant experiences and unwanted services and limited control over identity information and identity theft concerns.

By switching the identity data ownership to the individual, backed by a safe blockchain bioidentification we will see BioID in lieu of passports and signatures for identification.

The advantages of this self-sovereign identity for businesses, is that it will bring implicit compliance and regulation, prevent fraud, identity theft, and data breach and reduce costs, complexity, and unreliability. For governments it will ensure citizens’ privacy and safety, protection of ID documents from counterfeiting, alteration, or theft while simplifying experience and reducing costs and complexity of physical ID issuance, renewal, maintenance, monitoring, and verification.

One of the key take aways from the Berlin Blockchain Expo edition was the fact that the technology is not the secret formula to wipe all your issues away.

In the forthcoming months and years we will see the underlining technology settling down and companies such a Ripple, Lisk, Hyperledger and Ethereum establishing contracts and partnerships with traditional institutions from all verticals. Financial institutions are currently at the forefront of trials on blockchain within their walls but we had on stage case studies from Tennet, Airbus, T-Mobile, Bayer, DHL and German Stock Exchange to name but a few that prove that a wider range of industries are listening and adopting the technology in their own backyard.

Next Blockchain Expo will take place in Santa Clara in November where we will see what the US are doing in this space and bring a couple of worldwide showcases for a truly global flavour.

Hope to see you there: https://blockchain-expo.com/northamerica